Within my latest project proposal I planned to research into who stress affects the most, to define the target audience for my game. Below is that research.

Stress is higher within lower income households (recently) – Makes it clear money is a large factor within the cause of stress and something to consider when designing my game.

Millennials are more likely to manage stress in bad ways – Can I change this behaviour through a game?

Surfing the internet and watching the tv are bad stress managements – Could playing a useful serious game be a better option?

A game which encourages social support could be useful in lowering the stress levels of people – multiplayer games?

Graph shows that the mean stress level is still far higher than the mean healthy stress level. Showing me that though stress has lowered over the years, it is still a grave issue within the world, and something that would be useful to focus on solving.

From the graph I can clearly see that women have higher stress levels and could be seen to be affected by stress more than men. Making me think that I should focus on women for my target audience.

The graphs makes it appear as though millennials have the highest stress level than other adult age group. Telling me that this is the generation that is most in need of help when it comes to stress compared to the other age groups. – Reason to choose them for the target audience of the game

Connection between stress and eating disorders – Possible area to look into? 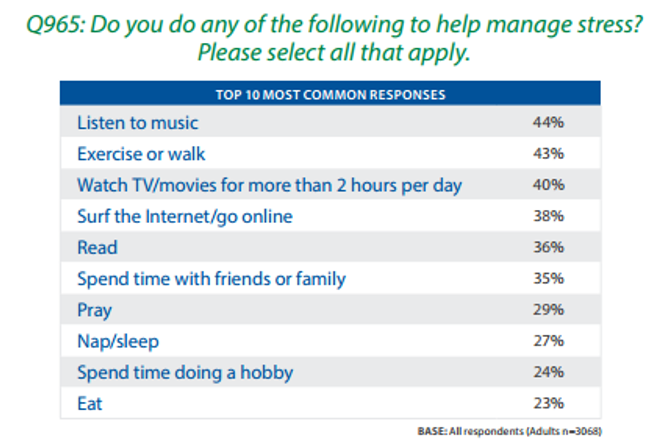 From the research it is clear that a millennial female who is a parent is the most likely to suffer from stress, with money and family responsibilities being the greatest causes.

Is this a too specific group? Do they play games? If they’re a parent do they have time to play games?

Millennials may be more of an appropriate audience, though could be too large of a range to focus on, as they’re an age group between 19-35, which is a diverse set of people and different types of games will appeal to the different ages.

I plan to research into what games appeal to female millenials, to see if the ideas I have created so far would appeal to them and if not why.